When two kids asked Zach Lindsay to sign their skateboards and take selfies with them a few weeks ago, it took him by surprise. The 18-year-old high school senior from Alexandria, Va. didn’t know he had fans.

Lindsay soon found out the guys recognized him as the owner of Leftys 29, a skateboard hardware and clothing store Lindsay and his brother co-founded in 2009. Named after their left-handed grandfather, Vietnam POW Red McDaniel, and the sum of 12 and 17, the ages Lindsay and his brother were when they started the company, Leftys 29 only has one mobile store front in the Washington, D.C. metro area. It’s likely Lindsay’s fans had shopped online and seen his picture there.

Lindsay isn’t famous: that was the first time anyone had asked for his autograph. And though he has a rather laid back demeanor with a sarcastic sense of humor, the young entrepreneur has an enthusiastic outlook on life and a giving heart many would do well to take note of.

In between running a business, finishing his senior year of high school and trips around the world with his family, Lindsay also buys 25 McChicken meals from McDonald’s at lunchtime every Monday to feed the homeless near Metro Center and McPherson Square.

“McChicken Monday,” as he calls it, was born out of L.A. THRASH, a Christian conference for high school-aged skaters Lindsay attended last summer. Upon his return to the East Coast, Lindsay and his friend, Eric, started Feed the Homies, a ministry made up of four skaters who deliver the chicken sandwiches each week. They walk through the area until all the meals have gone to someone in need. Sometimes it takes 10 minutes – other weeks, three hours. 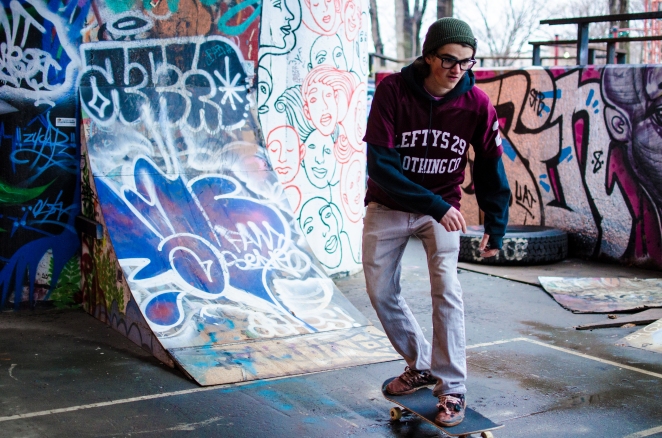 Zach Lindsay, 18, rides on his skateboard in Washington, D.C.’s Garfield Skatepark wearing a shirt from his clothing line, Leftys 29. He and his brother started the business in 2009. Photo by Natalie Gross

Since Feed the Homies launched and Lindsay started receiving donations for the cause from family and local churches, he’s gotten several suggestions for McChicken Monday spinoffs: Wendy’s Wednesday, Filet-O-Fish Friday and Salad Sunday, among others. He wishes he had the time to do them all.

He wants Feed the Homies to grow, after all, but ultimately, he wants these weekly encounters to be more than just passing out food.

“I’m trying to develop relationships more and more as the ministry is starting to grow because I don’t just want to be those guys that give them food and say, ‘See you later!’” Lindsay said.

He stays and talks with each recipient for at least five minutes. Last week, he got to know a man named Joseph, and Lindsay is trying to learn enough Spanish to strike up a friendship with Ramos, another man to whom he often delivers lunch.

Lindsay has a lot of life experience for 18 years. He’s traveled to all 50 states, Europe and South America. He’s owned a business since he was a pre-teen and jokes that as a skater, he faces near-death experiences every day.

The latest “close call” was on the D.C. Metro Jan. 12 – a McChicken Monday he won’t soon forget. It was the day one woman died and 80 other metro passengers ended up in the hospital after a train abruptly stopped, went dark and filled with smoke in a tunnel just outside L’Enfant Plaza. Lindsay remembers the smoke being so thick, he couldn’t see the other cars.

“We were on that train. It was pretty crazy because people were almost dying from breathing in the smoke fumes, and that was right after we had handed out McChickens, and we were on our way home,” Lindsay said. “A couple of people were throwing up. We were down there for 45 minutes and there’s smoke down there and you’re breathing that in. I started to feel like I had a headache and some of the people were just completely panicking. I remember there was this guy that was completely in a state of panic.”

But Lindsay said he wasn’t thinking about himself. He was more focused on helping a man to his left who was coughing hysterically. Feed the Homies came to the man’s rescue with a Sprite.

After graduation in May, Lindsay, who is homeschooled, said he doesn’t plan to go to college. Both his business and his ministry are growing and he sees himself sticking with them for now.

He’s not sure what the future will hold, but he knows one thing for darn positive: that skateboard isn’t going anywhere. With big dreams to move to Ecuador someday, Lindsay is hoping to use the sport to start another ministry there.

Above: Zach Lindsay, 18, makes a “hang loose” sign with his hand at Washington, D.C.’s Garfield Skatepark on March 19. Photo by Natalie Gross